See how Magoosh can help improve your school's test scores!

Email us to find out more!

Suppose you want to become a teacher.  I think that’s great!  Making a difference in the lives of young people is deeply satisfying.  It can be a steep learning curve at the beginning of your career, but this is true of many careers! And teaching is a much more emotionally satisfying way to spend your life than almost anything the corporate world has to offer. 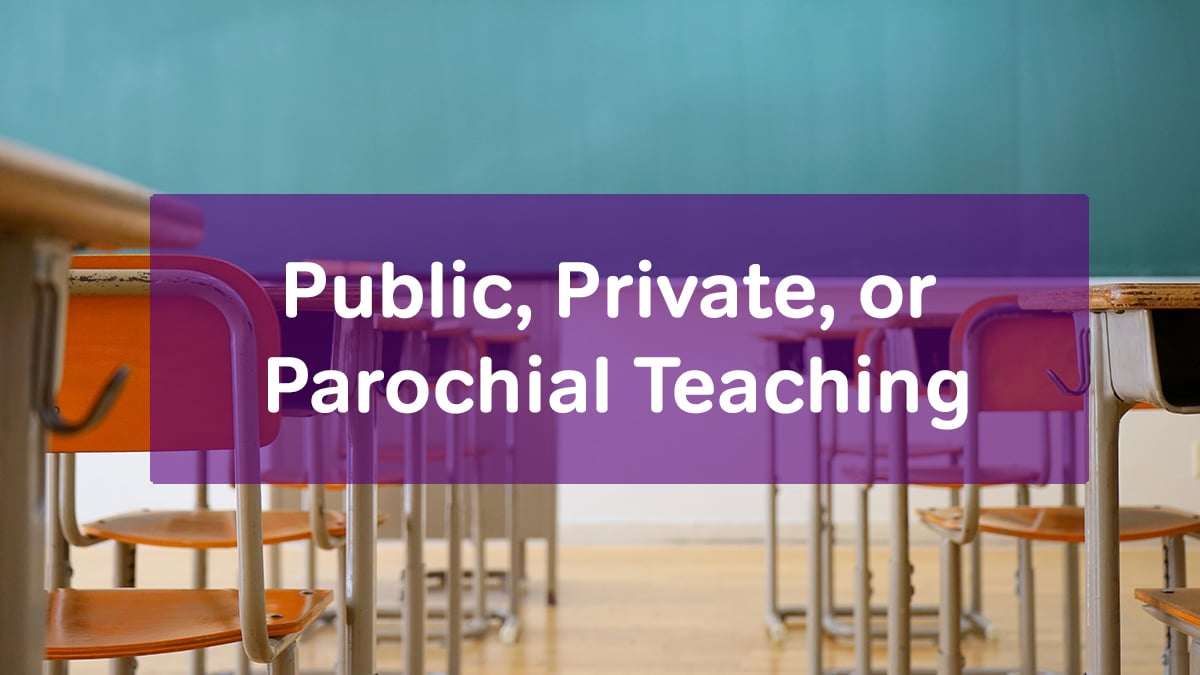 But getting a teaching job can be challenging when you are starting out. Certainly an organization such as Teach For America gets some folks started in their teaching career. So if you want a job, it’s very good to be aware of all the options. This is especially true if you are intentional about considering all the ways a job might shape your life.

Many folks studying to be teachers are focused primarily on one option: teaching in public schools.  And while that’s probably the largest category of jobs, it’s not the only one! So let’s take a look at the options. And as we look, we’ll include two frequently misunderstood alternatives–parochial schools and private independent schools.

Of the three options, you probably know the most about this one.  This is by far the most “legislated” of the three options.  Someone preparing to be a public school teacher has to go through a certification program and take tests such as the Praxis.

As a public school teacher, what needs to be covered in the classroom is often mandated by “the Common Core” or other standards.  The level of pedagogical choice that teachers have can vary from school to school.  In some schools teachers receive a scripted curriculum.  In others, teacher get only a broad standards and are left to figure out the details for themselves.

The quality of schools can vary wildly. It often depends largely on property values in the neighborhood and the school district.  Schools in rich neighborhoods often have the best equipment and supplies.  Schools in poor neighborhoods often are scrounging for the basics.  Public school teachers are typically unionized, and so the union has guaranteed certain wages and benefits.  But pay attention to current events in your state. In some states, these long established benefits are being rolled back.

Public school is free and open to all. This is simultaneously what is noble about it–and what is challenging.  It’s wonderful that the schools are free. But it is also a sad fact of human nature that people tend to take for granted anything that’s free.  Accordingly, in some public schools, teachers feel they don’t get enough parental involvement.

Public schools have to accept everyone.  And students who tend to have the greatest needs tend to enroll in public schools. I’m talking about:

Providing these students with high quality education is a challenge. Therefore, it is also a point of pride for many public school teachers.

The Roman Catholic Church runs the largest non-governmental school system in the world.  While there are other religious schools in the USA besides Catholic schools, they do account for the vast majority–almost 7000 schools nationwide. So I will center my discussion of parochial school on Catholic schools.

Many people wonder if you have to be Catholic to teach at a Catholic school. This is a valid question! You might think that refusing to hire non-Catholics is a version of religious discrimination—and normally it would be.

But religious organizations in our country do have license to discriminate based on religion. In other words, a Christian school cannot be forced to hire atheists to teach at their school (with limited exceptions, like if the school accepts federal funding).

Having said that, I must mention one notable exception. Catholic schools do tend to hire outside the faith on occasion. As long as you are not involved in teaching the faith in any way, you may be able to land that job.

However, keep in mind that you do have to have a healthy respect for and tolerance of the Catholic Church. For example, if you teach at a Catholic school you’ll probably need to attend a school-wide Catholic Mass a few times a year.  If you are the kind of person who can’t help saying negative things about traditional religion, a Catholic school would likely not be a good fit for you.

Folks who teach at non-state-affiliated Catholic schools don’t need certification–but many have it. And keep in mind that some individual schools may require it.  Also, many Catholic schools require students to wear uniforms. Some folks are in favor of this because it removes all the social pressures associated with clothing.

Who goes to a Catholic school?  There are times when the student himself or herself is a pious believer.  Sometimes, the parents are pious believers and they are trying to get their child to believe.  Other times the parents aren’t particularly religious, but they feel that such a school would be a good moral influence on their child.  Then there are parents who are simply suspicious of the quality of their local public schools.

There typically is some fee for student to attend a Catholic School. This fee can be significant if the Catholic school is fancy, for example a college-prep Catholic high school.  And with an increase in fees or tuition, teachers can expect to see an increase in parental expectations.

This is the option I know best because I spent twenty years of my life teaching at a private school.  I never got certified.  I never took any courses about teaching.  I never took any state-sponsored tests, such as the C-BEST or Praxis.  All this is also true of virtually all my colleagues.

Independent schools tend to attract students from wealthy families. They often charge high tuition and foster high expectations.  Many independent schools, even primary schools, are viewed as part of a “college track” education.

Think of this paradox. Many public school teachers are desperate for more parental involvement. Conversely, private school teachers often rely on administrators to run interference for them! They need administrators to moderate the constant pressures of parental attention and demands.  Understandably, parents paying $20 – $30,000 a year for their child’s education might have some very strong opinions about what they are getting for their money.

Most teachers at private schools do not have teaching certification, but most have advanced degrees in their subject.  It’s hard to get a job in a good private school without a master’s degree in the sciences. English and History teachers often have Ph.D.’s.  This option can be ideal for someone who once wanted to be a professor but at some point changed their mind.

Private school teachers often have tremendous freedom in what they teach and how they teach it.  Parents and administrators figure that an advanced degree means that the instructor will know what’s important to teach.  Obviously, there are general restraints–such as covering what might be on the SAT or ACT. And certainly each year’s course has to prepare students for the next year. But compared to all the standards that public school teachers need to follow, there is still an extraordinary amount of freedom.

It can be hard getting a job at an elite private independent school.  Having an advanced academic degree will help.  Having a teaching certificate may help.  Often once one has a few years of teaching experience, many more doors open.

Some schools offer truly extraordinary opportunities to their students.  Teaching at a school that has special beyond-the-classroom experiences can demand a great deal of energy. We all know that teaching requires a lot of energy in the first place! But this requires even more, and the rewards can be that much higher.

Some high schools have travel-abroad opportunities. Some, like the Verde Valley School, foster anthropological awareness through exposure to other cultures. And then there are others, like the Athenians School, that have Outward-Bound-style wilderness experiences.  These schools can transform students’ character in ways that could never happen in classroom.  Of course, such trips and programs usually require teacher chaperones. But think of this as an opportunity for teachers to have transformative experiences along with their students.

Getting a first teaching job is hard.  It’s good to be aware of the full gamut of possibilities.  If you have had experiences looking for jobs at any of these kinds of schools and would like to share your experiences, we would love to hear from you in the comments.

Magoosh is a play on the Old Persian word magush, one who is highly learned, wise and generous.

Company Home
About Us
help@magoosh.com